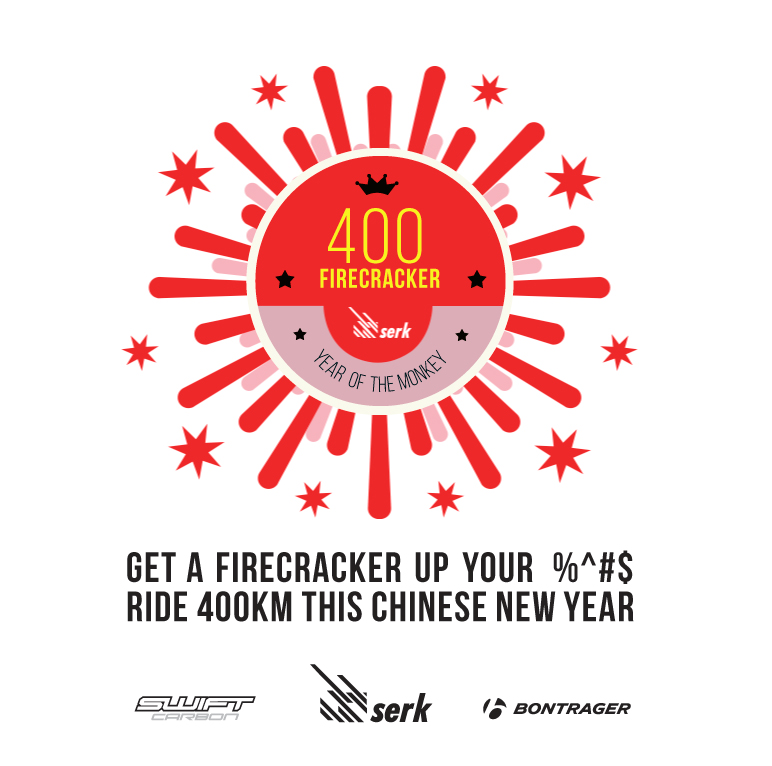 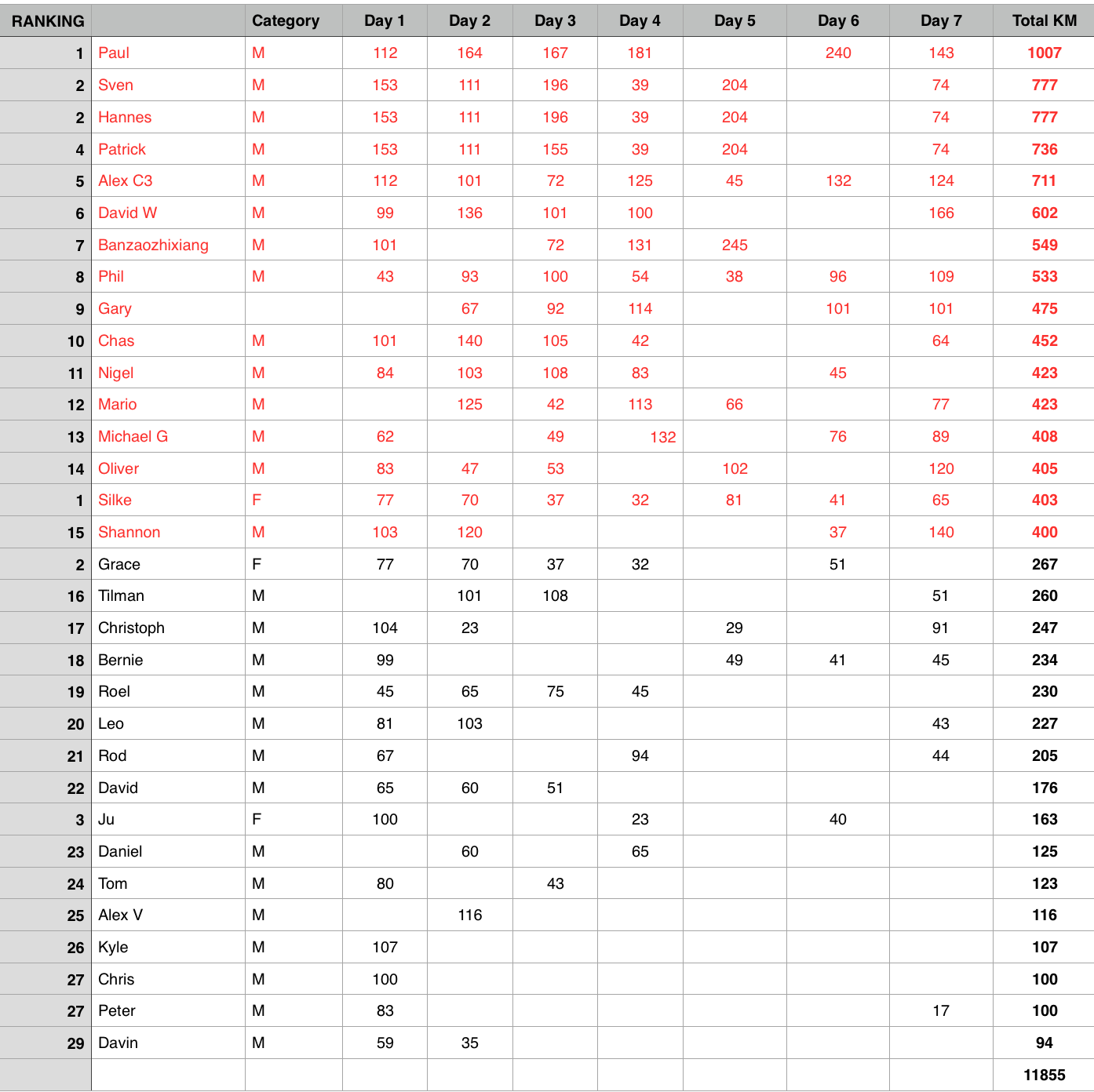 Best Overall Photo – (Serk Jersey)
Banzaozhixiang for his photo of bike against a CNY decoration. Ban also gets major kudos for completing the F400 challenge on a mountain bike on his own – 549km in total.
Best Monkey Themed Cycling Photo – (Swift Nanopack & 1 Xingzhe Bike Computer)
Chas Pope for taking a stuffed monkey while actually cycling. Tilman was a close 2nd having a real monkey (but no cycling – sorry T)

Best Firecracker up the %^$% Photo (Serk Deluxe Tune Up & 1 Xingzhe Bike Computer)
Oliver in Yunnan with his interesting firecracker themed images. Also kuduos to Oliver who rode the 400km on his own in windy conditions in Yunnan at elevation !

For all those that made the 400 club you are welcome to come into Serk to collect your bottle or hat. Looking forward to next years event !

According to the Chinese calender today is officially the first day of Spring. In my books it’s not Spring till you can ride outside without long finger gloves. We certainly have a way to go before thats the case but it has certainly warmed up a few degrees in the last week.

Spring Festival starts on Sunday so we are almost guaranteed blue skies and little traffic. Combined with the warmer “Spring” weather its already time to start riding outdoor. We’ve put together a little challenge to get you motivated and thrown in a few prizes to reward your efforts and creativity.

You’ve probably heard of the Strava Festive 500 challenge.  It’s simple – ride 500km between Christmas and New Year. Thanks to some inspiration from Travis we thought why not attempt a Chinese version – and hence the Firecracker 400 was born. Strava wasn’t interested in making our challenge official so we decided we’d just take it on ourselves. So here it is –

Get a firecracker up your $^%& and ride 400km this Spring Festival !

To make it more fun Serk have organised rides on Sunday / Monday / Tuesday / Wednesday (more details soon) and we are offering a small prize (and bragging rights) for everyone that completes the challenge. For the hard core guys and gals we’ll have an extra prize for the longest total kms ridden in the period. And some prizes for the best photos for everyone else. And the best bit you don’t need to be in Beijing to join – you can do it from anywhere*

To qualify you need to post 3 photos to your wechat moments each time you complete a ride during the challenge; 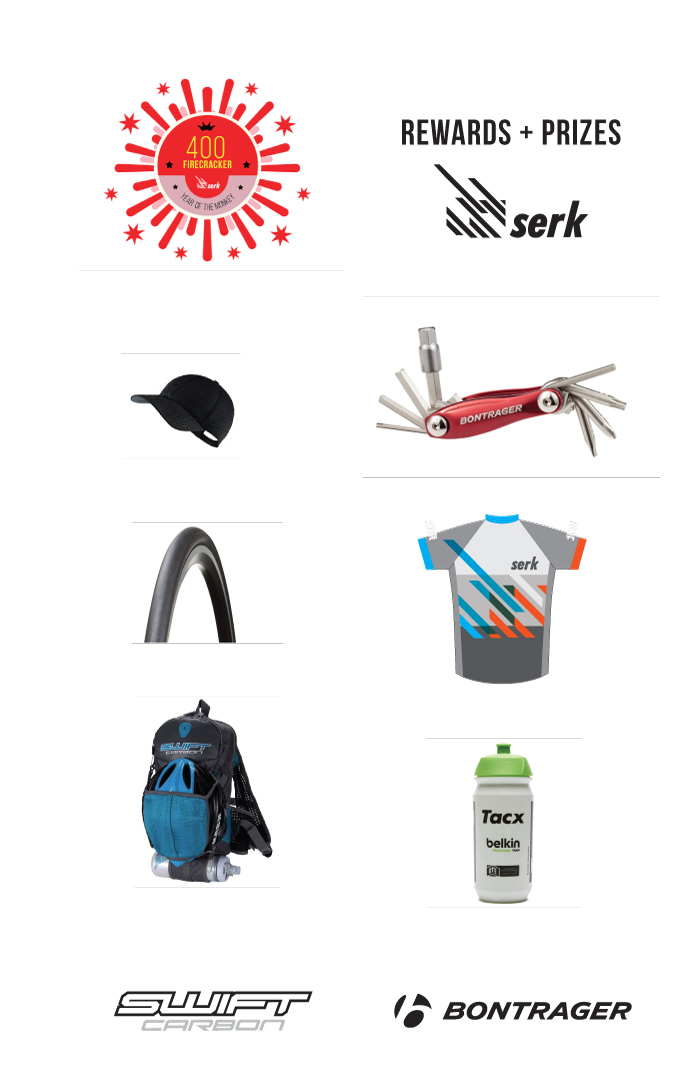 The male and female rider with the highest number of KM during the period also wins the following ;

We will also award the following prizes ;

Best overall photo on a ride during the period ;

Best “Firecracker up the $%$” themed photo ;

Thanks to Swift Carbon and Bontrager for the prizes !

*However shipping prizes to Mexico is not included