7 days in the shadow of

Here’s a tip if you are heading into the unknown: make sure the people on whose mercy you’ll depend are a generous and accepting bunch.   It’s what saved us for seven days in the shadow of Minya Konka.

In May of 2015, three of us struck out from Kangding, a town on the edge of the Tibetan Plateau.  We were riding gravel bikes, unsupported and with minimal gear.  We had sleeping bags but no tent.  The idea was to scout a route for a future gravel-bike trip that will take riders to the desolate reaches of Gar’ze Tibetan Autonomous Prefecture, a part of western Sichuan the size of Nepal.  In the end, we charted that route.  When the trip happens, perhaps in 2018, it will be a ride like no other.

Kitted up and ready for adventure

My companions were Shannon Bufton, 39, who runs Serk, a Beijing bicycle and bike-touring company, and Julian, 45, a former British soldier who runs Khunu, a company that makes yak-wool jumpers.  I’m 57 – and the weakest rider of the three.

The trouble with riding in Gar’ze is the dearth of information about its roads.  We discovered that on Chinese maps, some of the roads don’t exist  – and some that do, shouldn’t.  We had only a small road atlas and a series of more reliable satellite images that Shannon had downloaded onto his iPad.

Day one was a disaster after a bum steer from a local trekking guide.

Day one was a disaster.  Given a bum steer by a trekking guide, we headed up our first route to the valley below Minya Konka, at 7,556m the highest peak in Sichuan.  After seven hours of some riding, some walking up creek beds and a couple of crashes, we turned back to Kangding.  The rain came down in buckets.

Day two, we hitched a ride over the Kangding pass to escape the main highway, which was full of trucks belching smoke into the thin air as they chugged towards Tibet. Finally we found our glorious gravel, on a road that wound its way towards the heavens through emerald valleys of new barley, under a cobalt sky.  As dusk approached, we were at 3,400m and it was getting cold.   We came upon a farmhouse and after a short chat we had, for a small price, beds for the night and a hot meal cooked on a wood stove.  It was our first night of many among the incredibly hospitable Tibetans of Gar’ze.

In the shadow of Minya Konka we finally found the perfect gravel roads.

We wound our way up the road, silent but for the wind and the occasional screech of an eagle.  Fungus-pickers, on hands and knees, crawled through the alpine scrub beside us.  Now and again a head would pop up. We would call out “tashi-deleh”, the Tibetan greeting, and they would reply in kind.   Smiling broadly, they were not surprised to see three cyclists.  Just amused.

We crossed the pass at 4,550m, Minya Konka shining in all its snowy glory, vapour streaming off its peak.  Then we plunged into the valley below, a 60-km run meandering run through pasture and over swift rivers.  We finished the day at a small village where we stayed in a guest house where the elderly proprietors insisted we sit with them and drink endless cups of yak-milk tea, de rigueur when among Tibetans.

We crossed the pass at 4,550m, Minya Konka shining in all its snowy glory, vapour streaming off its peak. 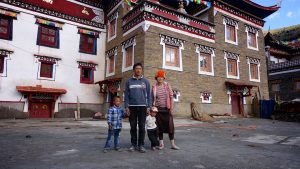 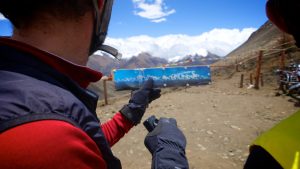 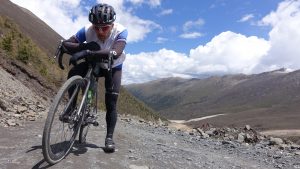 First days at altitude were taxing 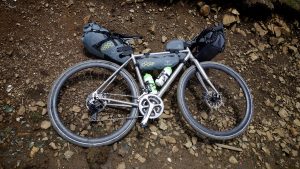 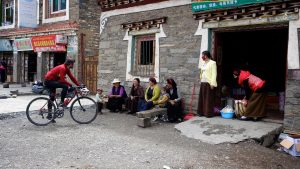 Julian chats up the locals

Day Four started out on pavement but changed to gravel as we left the main road and headed northwest towards the town of Litang, our objective.  Road quality deteriorated and riding became hours of pounding.  We were now into more jagged terrain; the broad vistas of the Minya Konka area were gone; in their place narrow, 1000-metre deep canyons cut by raging rivers, the roads hanging improbably on the mountainside.  As dusk gathered we reached a village called Liu Chang.  Now in remotest Sichuan, guesthouses were non-existent.  We asked where we might stay and a woman volunteered her home.  Her eight-year-old son, Jampa, led us there.

They lived in a classic Tibetan farm house of stone and wood. Our little guide disappeared for a minute and quickly reappeared with a BMX bike that he proudly showed us. He asked endless questions in Chinese, our lingua-franca as we knew little Tibetan and they no English at all.  I was exhausted and passed out after a dinner of pancakes and tea.  I was told later that Jampa compared my snoring to that of a yak.

Jampa had a 1000 questions about our bike kit and proudly showed his steed of choice.

Day Five was when things went wrong.   After 20 kms of bouncing along the mountainside, we plunged 1,000 metres into the valley.  From the south side of the river we could see a steep ascent on the north side. We concluded it would lead over the next pass and then be a clear shot to Litang.  Wrong.

There was an excellent bridge in the valley.  We crossed and started the ascent.  Although it was May and near zero in the mornings, on this face in the afternoon sun it was getting into the 30s.  When we reached the top more than an hour later, there was scribbled on a rock in Chinese “26 bends”.  Hmm, I thought, five more than Alpe d’Huez.  Our jerseys were encrusted with salt.  Not surprising: my Garmin said the temperature had touched 39.

The road along the ridge was even worse, with long sections of scree. We covered 15 kms in the next hour-and-a-half.  We were now low on water.  At a fork in the road we decided that Litang must be to the right; the map seemed to say that.  I took my last sip of water.  No problem – there must be a store down there.  Only a few Snickers remained as food.

When we reached the top more than an hour later, there was scribbled on a rock in Chinese “26 bends”.
Hmm, I thought, five more than Alpe d’Huez. 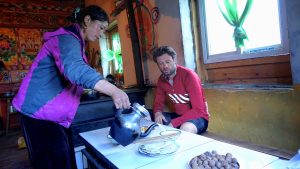 Jampa's mum made some mean pancakes 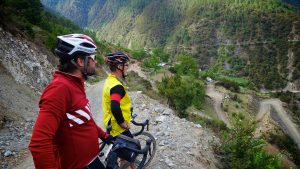 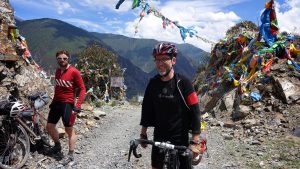 Happy to see the end of that monster climb 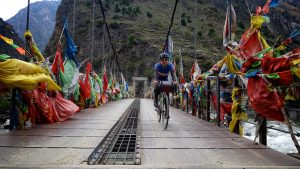 Bridges were definitely better than the roads

Thus began our descent into what we dubbed the Valley of Death.  The road was steep, the surface was loose.  But we could see a village at the bottom and the map indicated that the road carried on from there.  Julian suffered a puncture, so Shannon stayed with him while I continued down.  As I approached the bottom, it became obvious this was a dead-end valley -- the map was wrong!  Going back up at this time of day and with no water would be suicide; sleeping in the open and dehydrated might be the end of us.  The temperature would soon plummet.

After 500 vertical metres of descent, there were a few houses and a fork in the road, with a hairpin right turn and then another descent of  200 metres into the village at the edge of the muddy, churning river.  Reaching the village I realized it was deserted and there was nowhere to get water.  Lacking the strength to ride, I pushed my bike up the switchbacks to the fork.  It took an hour.  Soon it would be dark.

Julian and Shannon took 45 minutes to repair the puncture, confused and disoriented from dehydration.  Reaching the fork, they took the other option and started to go house to house.  It was here we met our saviour, Lobsang.  He was home alone as his family were away picking caterpillars.  He cooked us noodles and eggs, which we wolfed down as we drank thermos after thermos of warm water.  It got better: Lobsang produced three bottles of beer.  We slept under the stars that night on the terrace atop the house.

Into the Valley of Death

The next morning Lobsang refused to take money, so I hid some bills under his tea bowl.   Our bottles and our bellies full, we walked for two hours back up the hill out of the Valley of Death.  We ditched the Litang plan, backtracking down the ridge and the Alpe d’Huez switchbacks to the river.  At the bridge, my rear tyre gave out with a bang.  Six days on these roads and a new tyre was toast.  I used our one spare.  We found a trucker who was willing to take us up the other side of the river valley and drive us over the next pass.  He mentioned that that a truck is finished after two years on those horrific roads.

He dropped us and we rode another 40 km.  As night fell we met our next saviour, a round-faced, smiling guy named Da Shan.  Unusual for these parts, he was Han Chinese, but married to a Tibetan woman.  His wife was away and Dashan was home with his daughter, a sweet girl of about six.  He cooked us a green-onion omelette that, by Shannon’s count, contained 20 eggs.  The next morning we said farewell we departed for Kangding; Dashan left for a caterpillar camp.

At the bridge, my rear tyre gave out with a bang.  Six days on these roads and a new tyre was toast.

So began Day Seven, a 170-km grind with 2,300 metres of climbing.  Most was on decent tarmac, but the temperature on the pass above Kangding (4,400 m) was minus two –  with hail, freezing rain and then snow.  On the descent, shivering uncontrollably, we played chicken with the oncoming trucks, which would overtake despite our flashing lights.  We dropped 1,500 metres over 35 kms and arrived back at Kangding. My Garmin told me I had burned 6,000 calories.

We left the next morning from Kangding airport, at 4,300m the third highest in world. Visibility was unlimited and Minya Konka loomed to our left.   From this vantage point you could see the route of our entire trip.  We looked down at the roads snaking through the mountains.  I thought to myself, in those little villages dotting the mountainsides live people who will take bizarre strangers on bicycles into their homes without a second thought.   Bless them.

I thought to myself, in those little villages dotting the mountainsides live people who will take bizarre strangers on bicycles into their homes without a second thought.
Bless them.