The Nearly Worlds is designed as one-day cycling party. The race is limited to 120 participants. It's a unique and super fun format.

The handicap is based on the following factors :

We have a complicated spreadsheet to work all this out. The older you are the more bonus seconds you receive. Have a few kids and a heavy bike? Lots more bonus seconds. This is the race where the best training might actually be drinking beer and eating hamburgers. Or is it?

We are combining the Womens and Mens and races into one. Based on the time differentials between mens and womens cycling world records we will give all women in the race a head start compared to men of the same age.

And a team prize for the highest ranked country. So get your team together and start strategising and maybe do a bit of training - either on the road or at the bar... 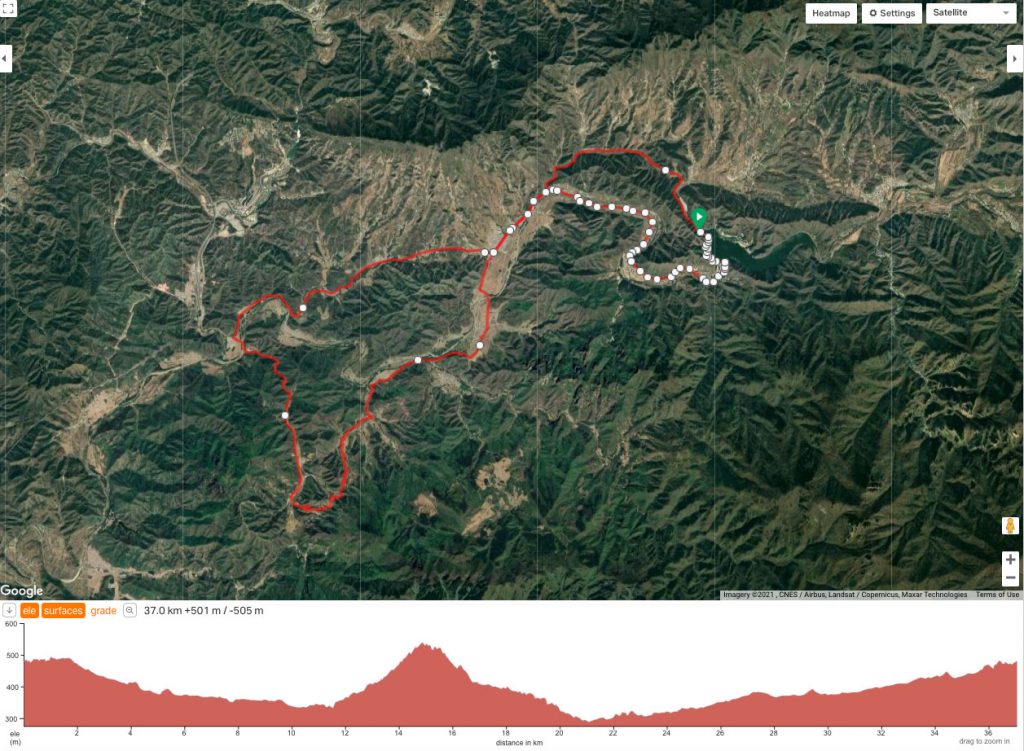 The course for both men and women is the same - 2 laps of this 37km circuit. On each lap there is a 3.3km long concrete climb (you will do it once each lap, total twice) with an average of 6%. There are some nice switchbacks in there and this is where the main action in the race will be.

Special World Champion jerseys will be awarded to the winners of each of the following categories : 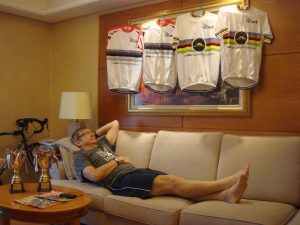 Prize : Each category winner is awarded a World Champion Jersey and trophy.

The starting point is around 110km from central Beijing. If you prefer to sleep longer in the morning or bring your family out to make a weekend of it we have arranged preferential rates at the hotel that is hosting the event. The Hotel is called Yunlan Shan Zhuang 云岚山庄

You will have to self drive if you take this option - we suggest arriving on Friday afternoon.

The hotel is a decent local hotel in a very picturesque area of Fangshan Shidu. It's close to a bunch of tourist spots which is a good location for after ride hiking and sightseeing.

There are one type of room available to choose:

Fill in the race registration form below and we make a booking in your name. Please bring your passport/ Chinese ID card when you do check-in and make the full payment on the hotel reception.

Cancellation more than 7 days before event starts.
We are ordering a custom jersey with your name on it. Once the order has gone in on Sept 22nd there is no refund available for the jersey. If you can not make the event we can will refund the amount paid minus 300 RMB.

Cancellation less than 7 days before the event starts.
No refund.

COVID Cancellation
In case of COVID related issues in Beijing or the venue area the event will be cancelled.
Full refund minus 300RMB if you ordered a jersey.

Bonus seconds will be awarded for :

We've also looked at the differences in world record times between male and female elite riders and have data from our previous Nearly Worlds. We've worked out a formula to equalise the men and women in the race.

No time for training, no money to spend on the bike ? Now is your time to use the kids and lack of training to your advantage. You’ll get bonus points for each child under 10 or any child under .

Serk is a Beijing based bike brand and community. Serk has been organizing pioneering adventures across China since 2012. Check out our 12 day trip to Everest Base Camp in Tibet or our epic gravel trip to Gansu. Or you might be interested in our range of Titanium bikes and carbon wheels.

REGISTRATION IS FULL. WE'D LOVE SOME VOLUNTEERS TO HELP SO PLEASE CONTACT @SERK ADMIN ON WECHAT