Panda Corner was instigated during the 2013 Tour of Beijing. The fan event was designed to encourage local fan engagement with the race, generate media attention in both local and international press and of course have lots of fun !

Inspired by “Dutch Corner” at the Tour de France the event was a chance for fans to come out, get dressed up and cheer on their favorite riders. It also happened that the Panda Bear is part of cycling folklore thanks to the now famous incident where a man in panda costume jumped over the barriers in the finale of Liege-Bastogne-Liege and chased after Dan Martin before his historic win. We decided that the Panda as a Chinese animal should engage with Dan and pro cycling on home turf and hence Panda Corner was born. 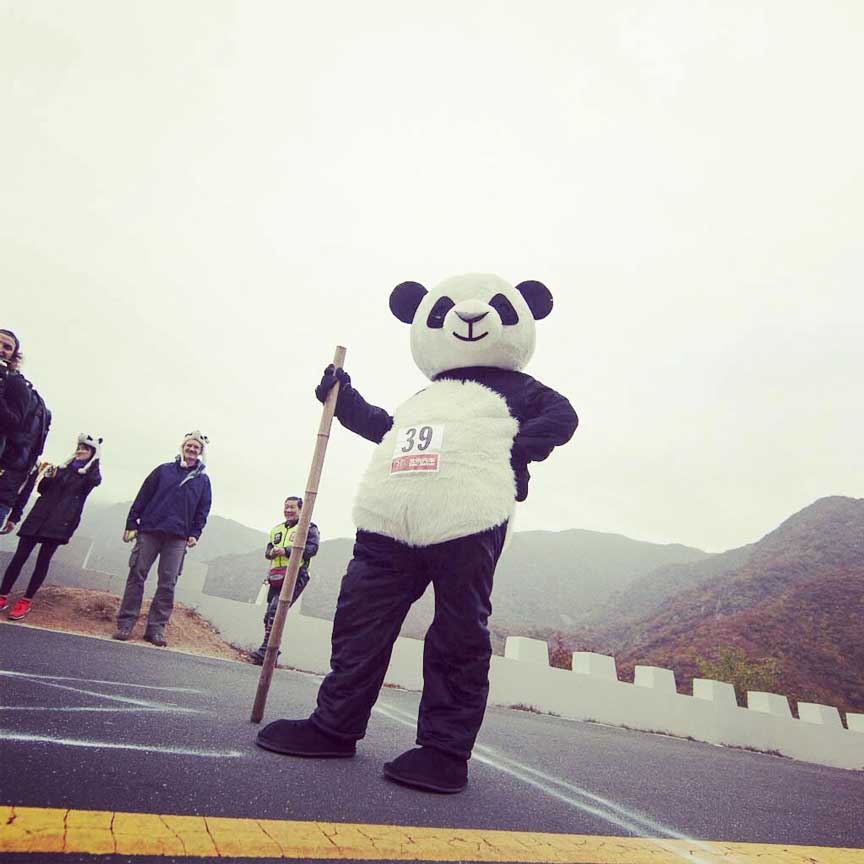 This is how the day unfolded.

All the teams were briefed on the morning of the stage about the appearance of a bunch of Pandas and a special competition. For the first time a unofficial classification was added to a World Tour race – P.O.M. Panda of the Mountain. The first rider across the POM line won a night of free drinks at Serk for the whole team. 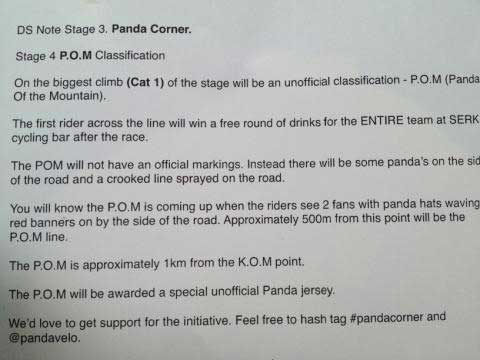 Early the same morning a bus full of Pandas left Beijing bound for the mountains. We were all in high spirits till we realized we were on the wrong route ! Holy Panda ! The whole plan was under threat. Mrs. Panda had a few words with the bus driver while Mr. Panda paced up and down the isle sweating like a..well like a panda. Mr and Mrs. Panda had a few exchanges in Panda-hua which was highly amusing to the other 40 or so panda heads on the bus. It seemed that everything was going wrong at one stage. Roadworks, a donkey, police road blocks and a bus driver that didn’t want to use his horn almost derailed our Panda party completely. 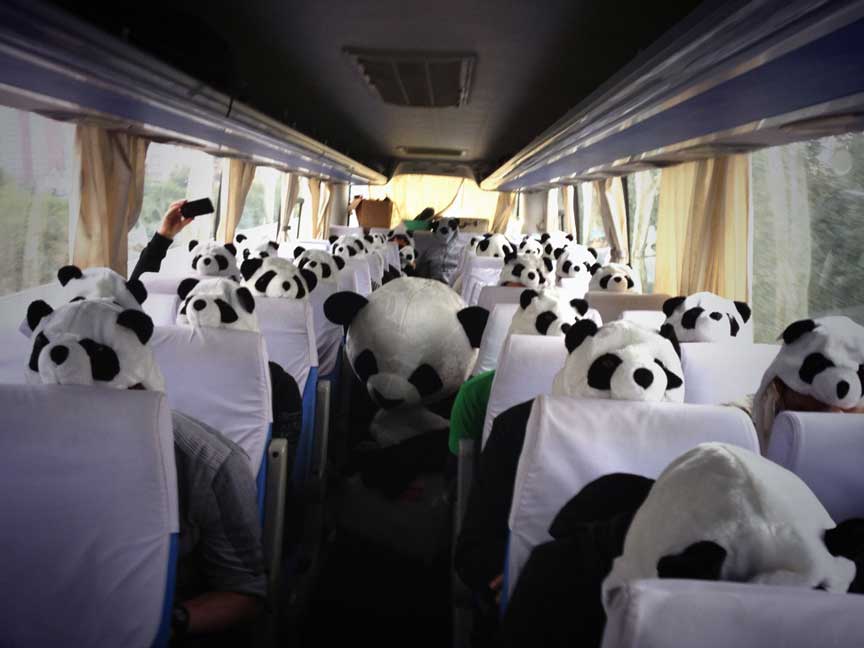 After a few stressed phone calls to race organizers and the Panda God we made it onto the right road with less than 5 seconds spare before the police completely shut down the road in front of the race. Panda cheer ! Mr. Panda was relieved. With the stress he went through there is little wonder his species is almost extinct.

Once on the mountain the fun began. The police greeted us on the corner but couldn’t find handcuffs big enough for the giant panda paws so they let us continue with the party. 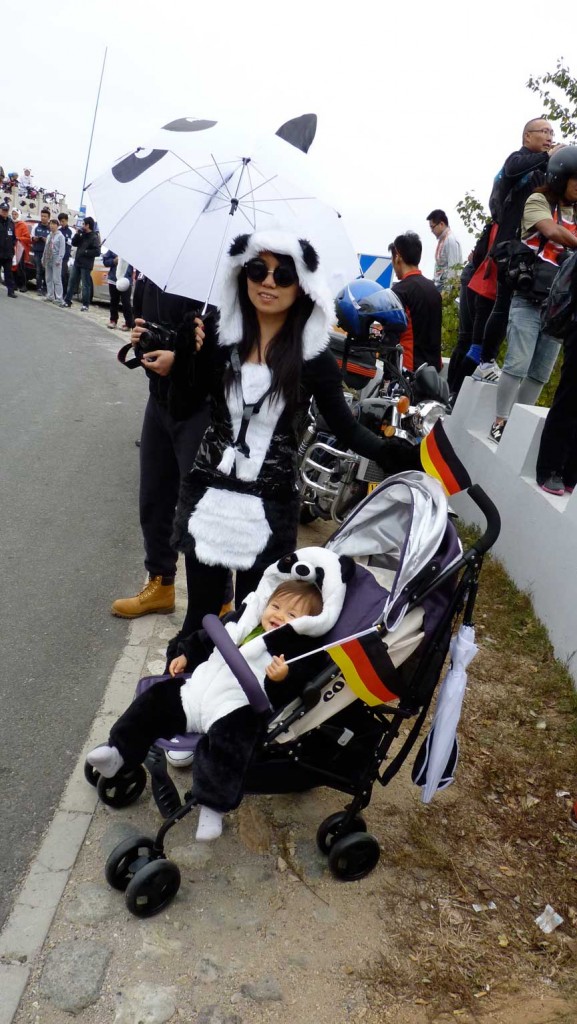 Mrs. Panda did a great interview on BTV and Mr. Panda was mobbed by the local press eager to capture the start of what could be a great roadside tradition at the Tour of Beijing.

It wasn’t long before the riders started snaking their way up the climb. The POM line was readied and we all took our place and started cheering. 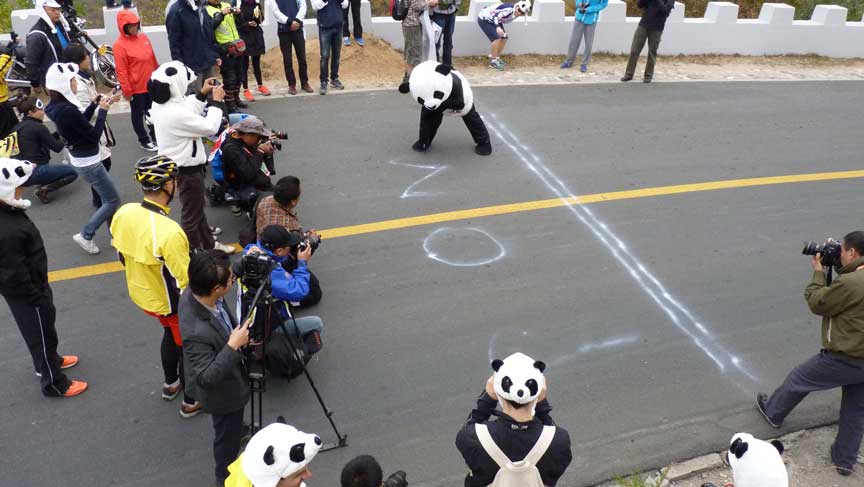 There was a breakaway up the road and Hayden Roulston was first across the line to claim the first ever POM prize. The real excitement came a few minutes later when the peloton rolled through. Dan Martin, the King of Panda’s leapt out from the bunch to greet the fans in a highly symbolic gesture which represented an engagement with the Chinese race from the peloton. 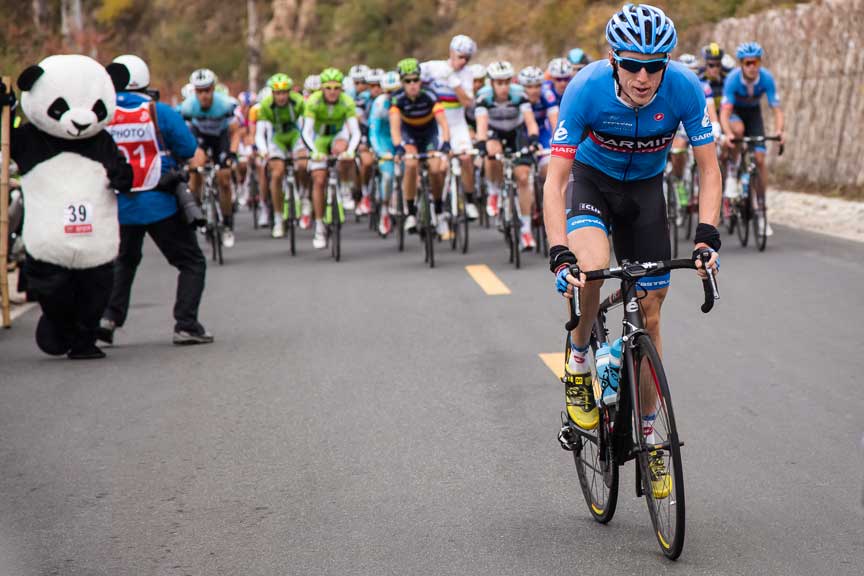 Mr.Panda not only gave Martin an unforgettable ride in China, but also made himself a symbol of the Tour of Beijing. Together we showed to the world Chinese fans’ enthusiasm. A “cold” competition was made “warm”. 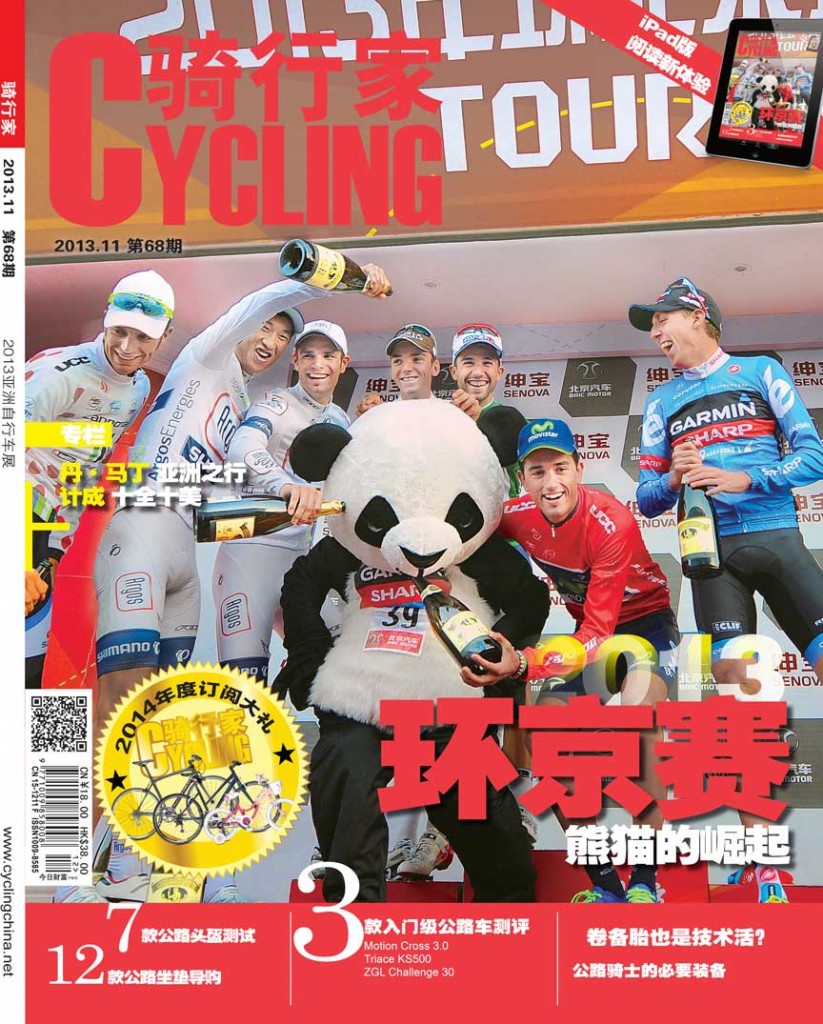 Global Cycling Network made a great video of the day – you can check it out here.

On the final stage of the race Mr. Panda was invited back on stage for a presentation with the winners of the race. He was pretty happy to finish on the podium of his first World Tour race – especially considering his overweight and under trained state. He was also pretty popular with the podium girls. 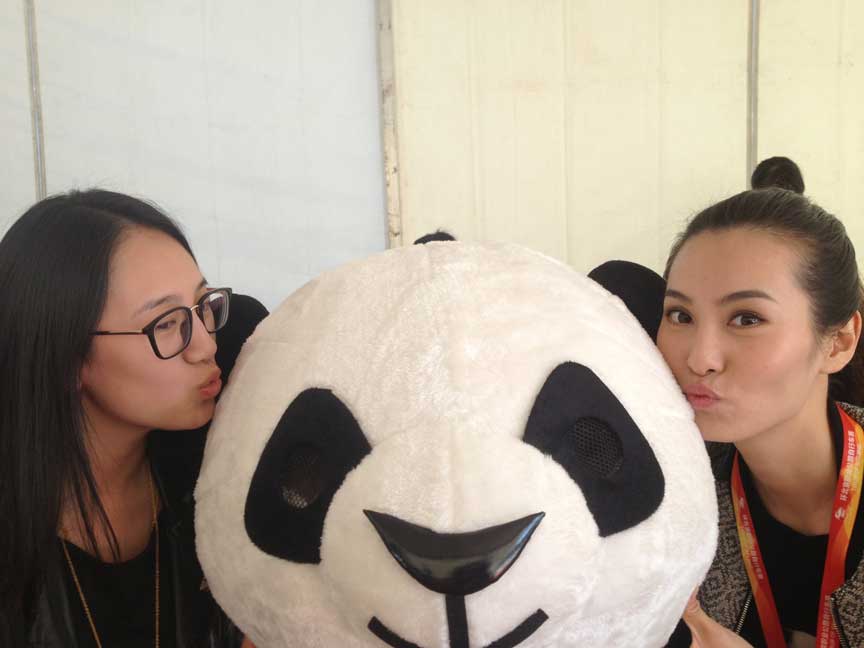 Hanging with the podium gals before the big presentation. 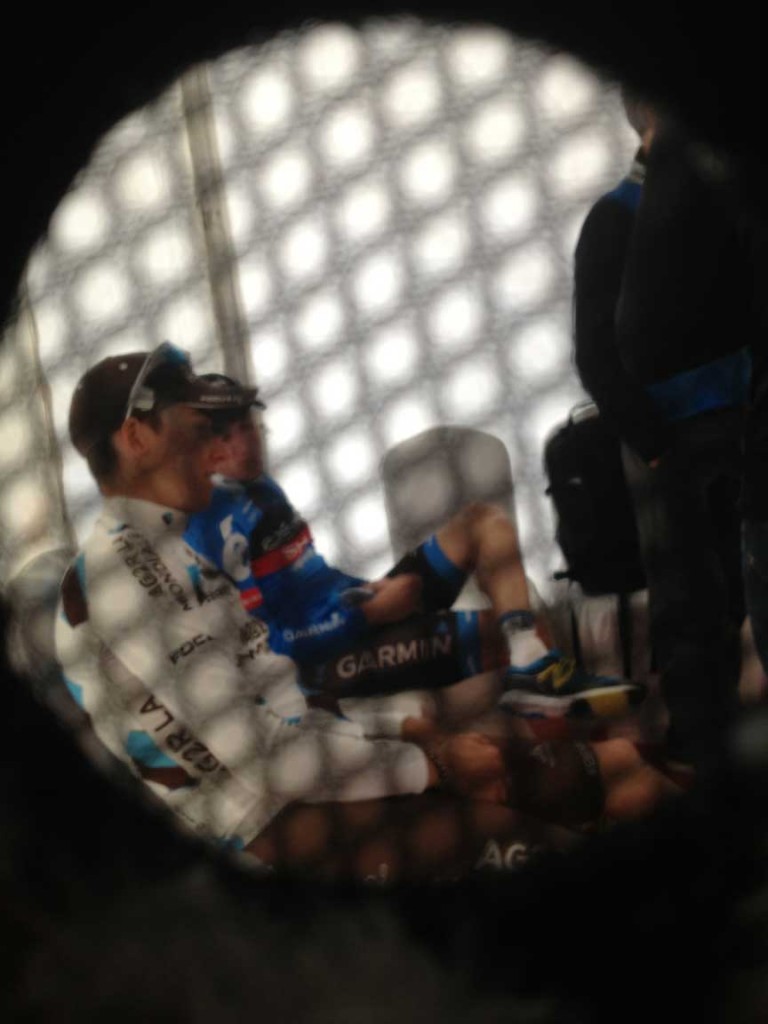 Panda view of the boys before they hit the podium. 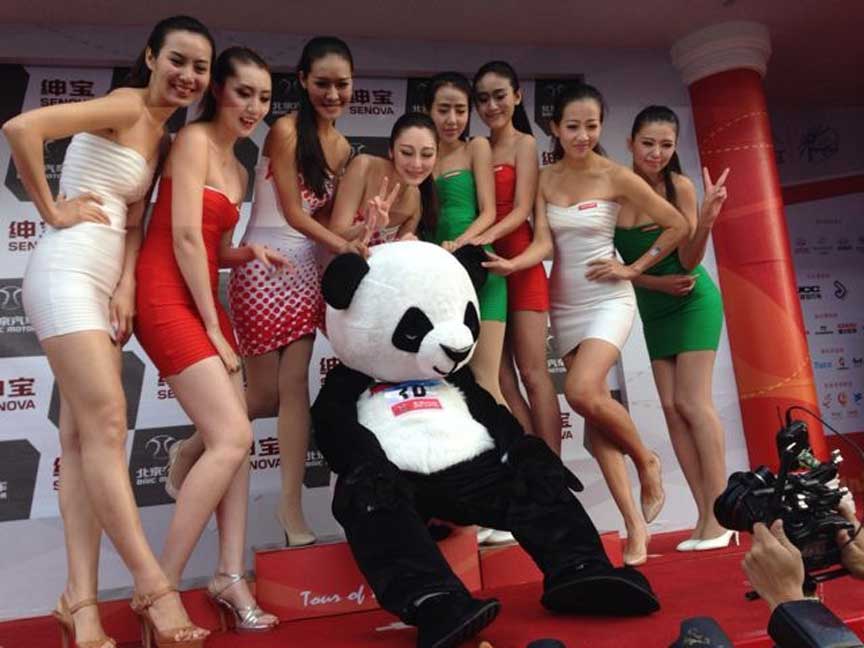 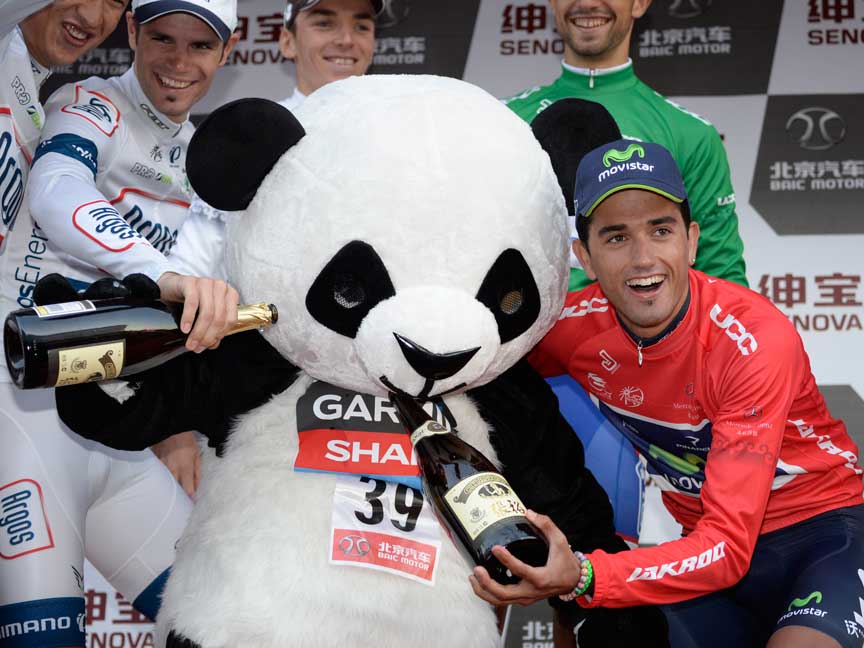 Following the race team Belkin invited Mr. Panda for a tour around the city. Lama temple, Silk Market and ride through peak hour traffic with Robert Gesink and the team on mountain bikes. A very fun experience ! 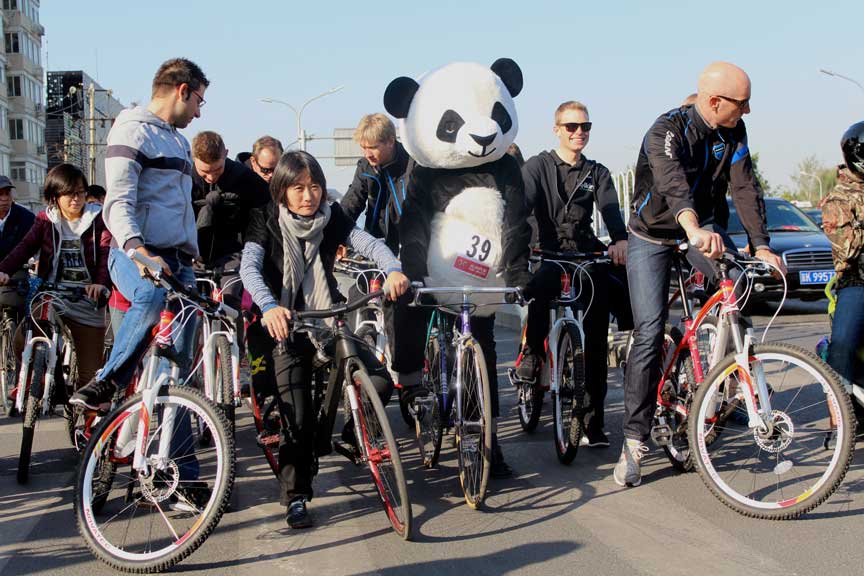 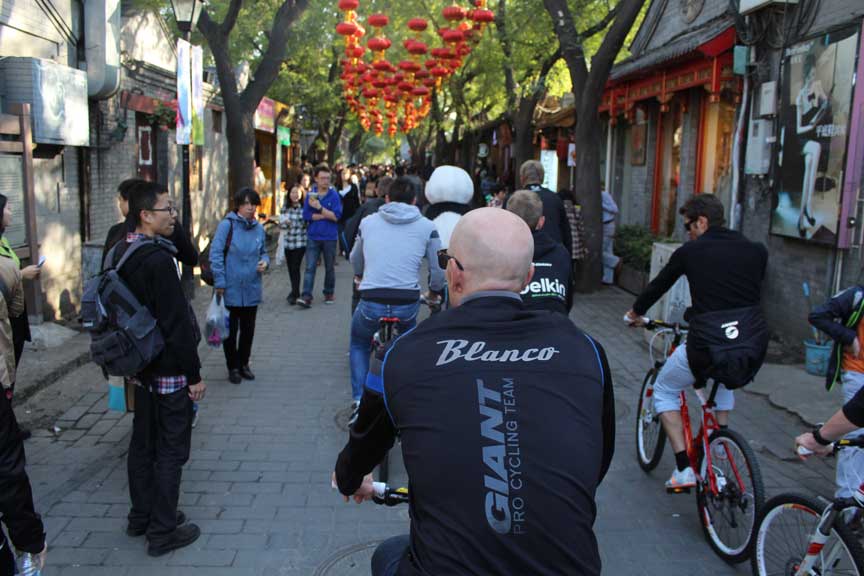 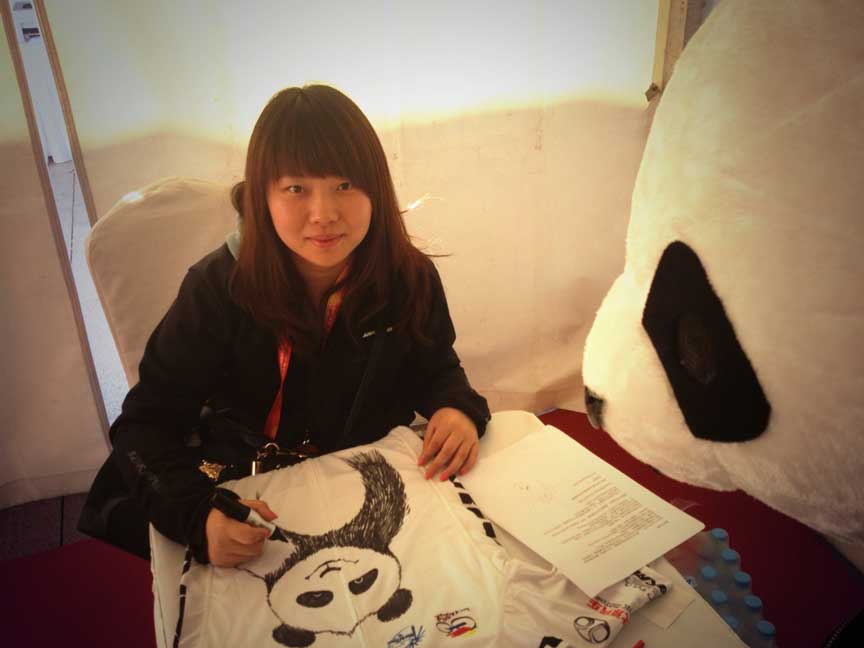 Preparing the POM jersey with Jakroo ! 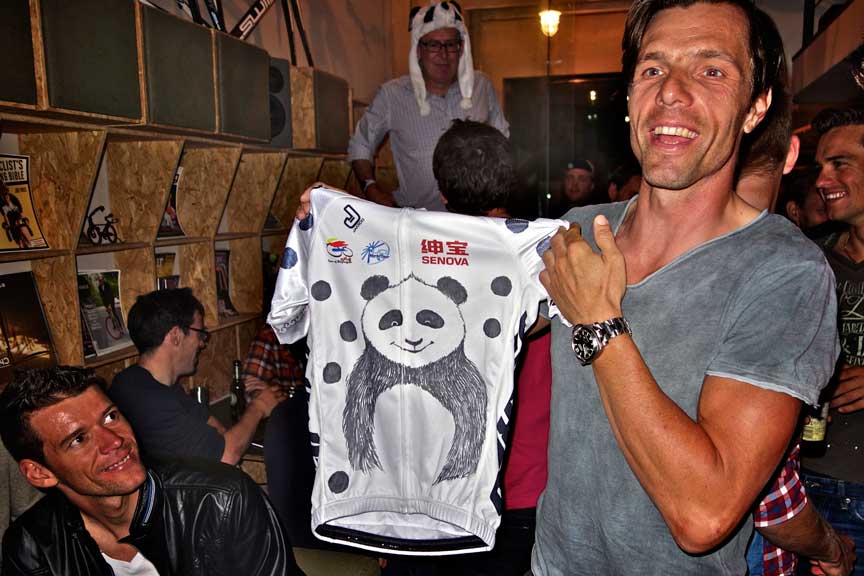 POM Jersey presentation at the Serk after party. 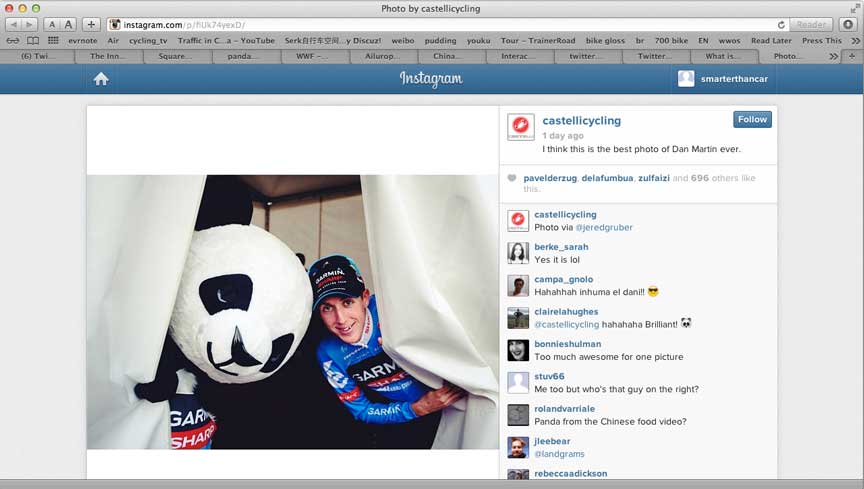 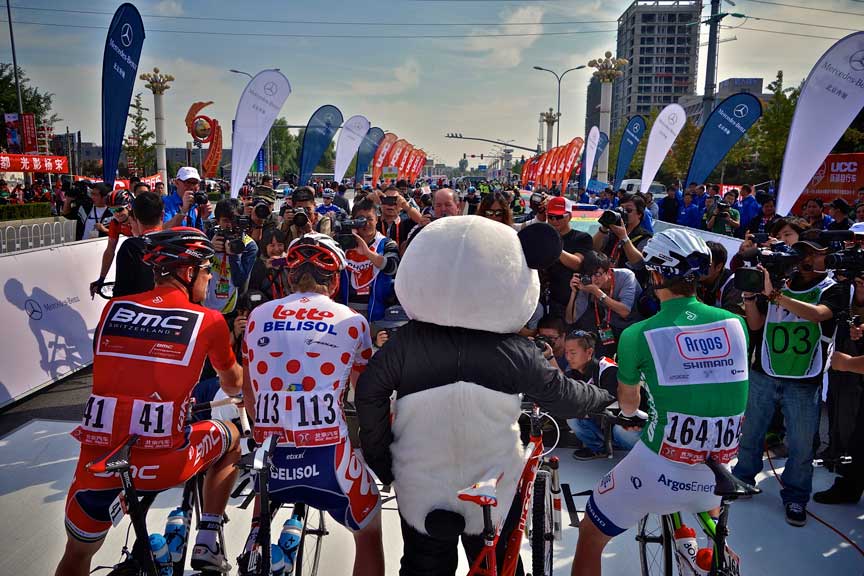 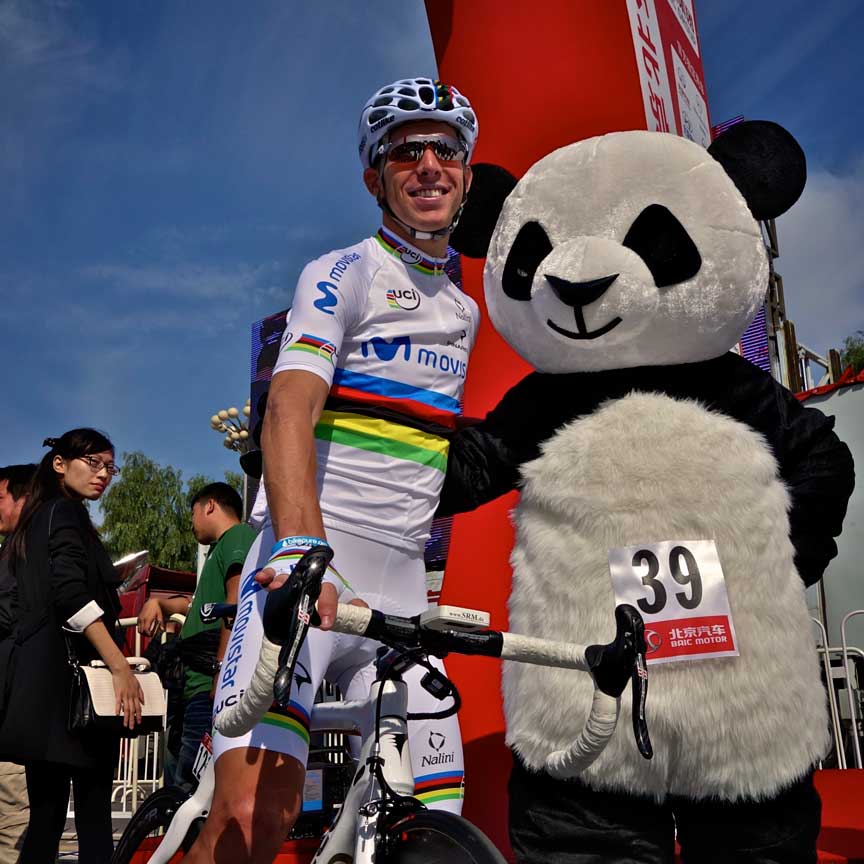 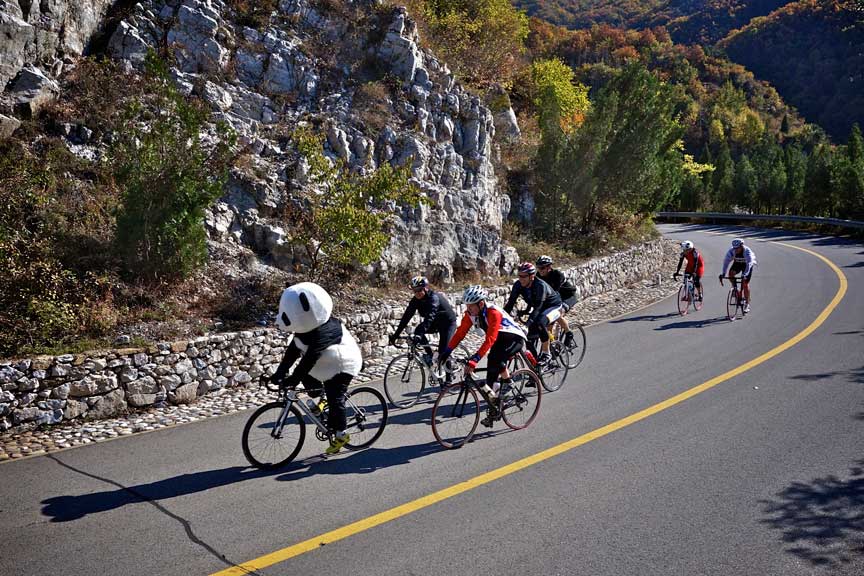 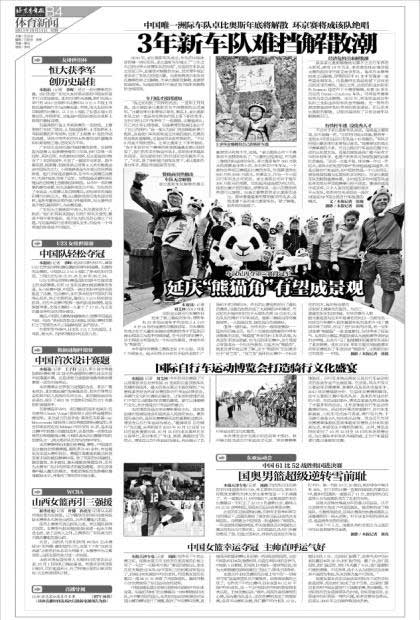