The founders of SERK – Beijinger Liman Zhao and Australian Shannon Bufton – have been working hard over the past 2 years to promote cycling culture in Beijing. They co-founded Smarter Than Car, Beijing Bike Week and have undertaken research on Beijing’s bicycle cultures which has been presented around the world. The SERK space represents a focal point for their activities and a meeting place for those interested in bicycles and in reinvigorating the two-wheeled culture of the former bicycle kingdom, Beijing. The space was set up as melting pot of ideas for bicycle cultural exchange between East and West. The SERK space is an architectural insertion into a traditional Hutong still flourishing with two-wheeled culture. It’s open at the front and invites the passerby to engage with the concept and think about the bicycle in a new light. Thereby the SERK space becomes much more than a traditional bicycle shop, bar or cafe. It is a place of exchange, wonder, learning and promotion of a newly invigorating bicycle culture in Beijing.

Beixinqiao San Tiao No. 40-2 东城区北新桥三条40-2
Map is on attached flier and google version can also be found here :

Its 5 minutes walk from Beixinqiao or Lama Temple subway stations. 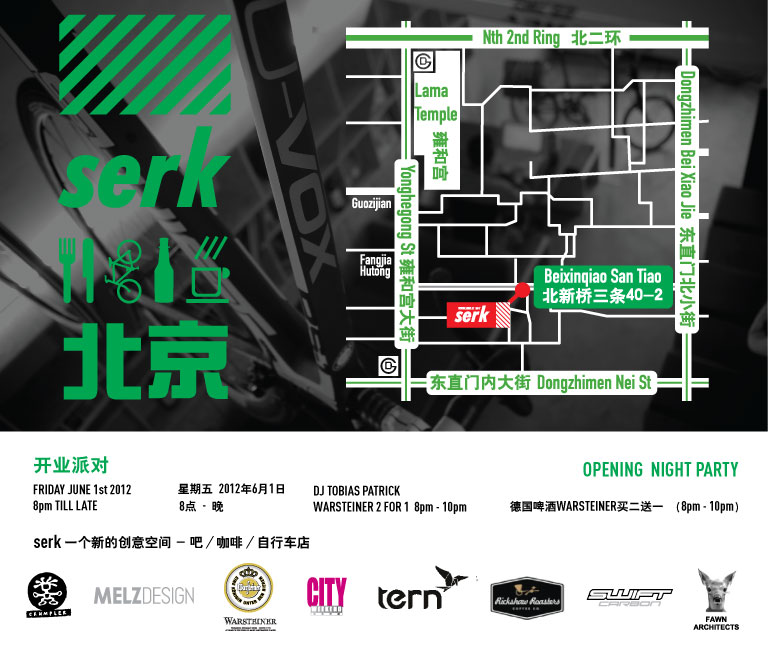