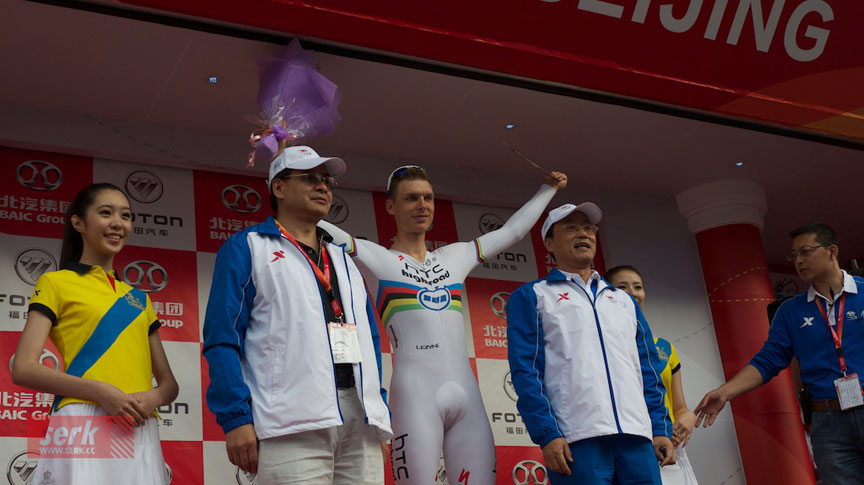 “Welcome to the first World Tour Event in Asia. Welcome to China. Welcome to Beijing.” These were the words of the Chinese organizing committee at the opening of the Tour of Beijing dinner last night. After months of planning by the UCI and Beijing Government the tour finally started today outside the iconic bird’s nest in Beijing’s Olympic Park.

Stage 1 is a short 11.3 km time trial around the Water Cube and Olympic Park. The course was relatively flat and scenic with one technical 180 degree turn heading into the Olympic Forest Park. Unfortunately the weather was less than ideal at the start of the day with heavy fog which had some of the teams and riders worried. By the time the first rider left the start house the air had cleared somewhat and Beijing’s famous October blue skies were out in force.

To reduce travel costs for the teams riders were not permitted to ride time trial bikes and had to ride their regular road bikes. There were 147 staters from all of the pro teams plus the Chinese national team. A few of the Chinese riders have been riding at the UCI World Cycling Centre in Aigle Switzerland in the past month. The UCI are providing world class training for these athletes to help the development of Chinese cyclists as part of their partnership with the Chinese Cycling Association. 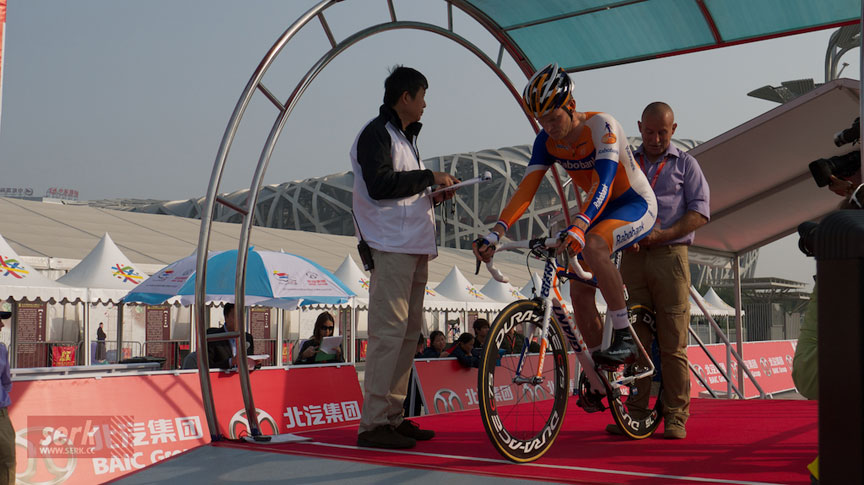 Lars Boom readies himself for the first stage time trial. No time trial bikes were permitted at this race to cut down on team costs so riders rode their regular road bikes.

Despite the tour being organized quite hastily and the threat of boycotting from some of the teams there are quite a few big name riders that made it to the start and seem happy to be here. David Millar who initially was reluctant to attend due to the recent birth of his son had this to say, “…now that I am here, I am happy to be here. It’s tough to leave my son so soon after his birth but this new race is important for pro cycling”. Other top riders include newly crowned time trial world champion Tony Martin, Olympic road race champion Samuel Sanchez and Chris Froome from the UK who impressed with his recent 2nd place in the Tour of Spain.

JIANG Kun from the Chinese national team had the honor of being the first rider to set off in this first Asian World Tour event. His time of 15’28”92 wasn’t so great and he finished in 132nd place. The Chinese riders aren’t expected to be very competitive in the race this year as they have no experience racing at the World Tour level. Pat McQuaid (UCI President) yesterday predicted that the Chinese could have a World Tour level team within 6 years so it might not be long before we see Chinese riders dominating some of the stage s of the tour. 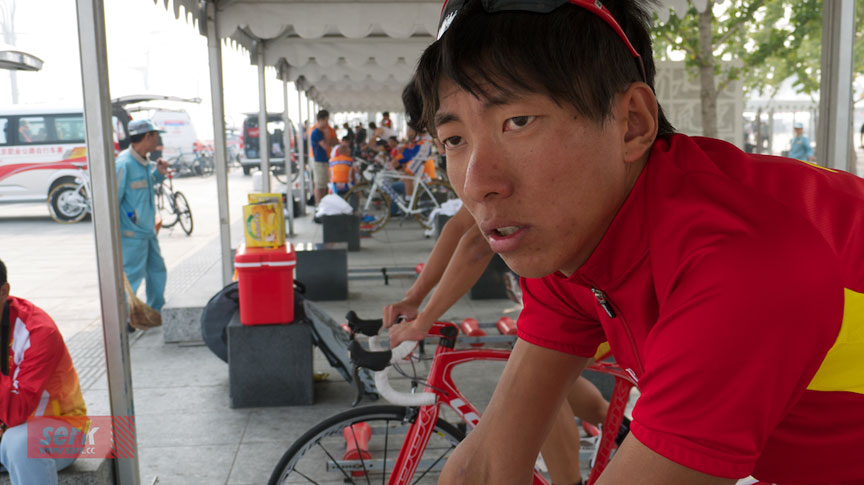 ZHANG Ruisong from the Chinese national team warms up before the time trial. Most of the Chinese team are under 23 including Ruisong

The young Brit Alex Dowsett from Team Sky impressed with the fastest early time in a blistering 13’57”22. His time wasn’t trumped until an hour or so later when fellow countryman David Millar from team Garmin Cervelo came in at 13’50”22.

Another British rider Chris Froome came in with a fast time 2 seconds slower than Dowsett. 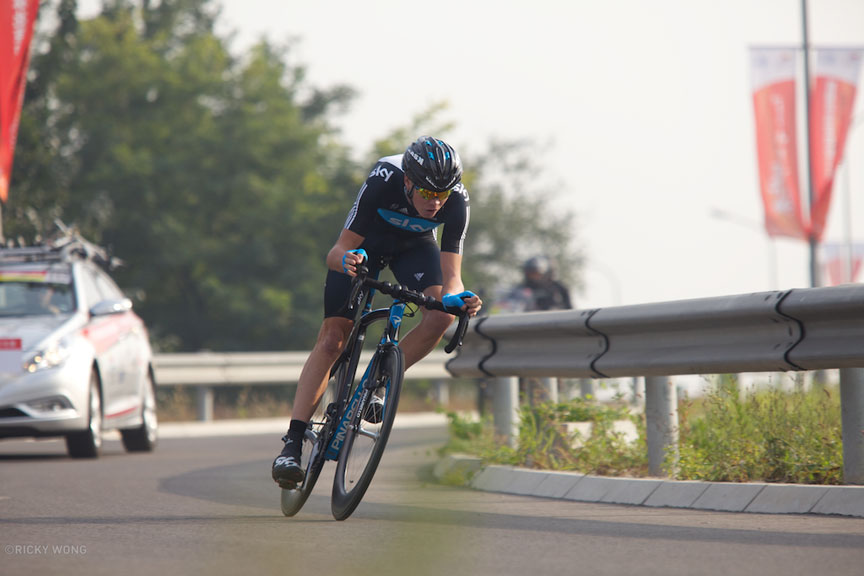 Chris Froome flies around the course fresh off his excellent team ride in the Copenhagen World Championships.

Samuel Sanchez the crowd favorite was second last to start. Yesterday the Euskaltel-Euskadi lead rider was offered, appropriately, the honor of wearing the Tour of Beijing’s number one race bib he politely declined, preferring to take the number eight instead.

“The Chinese fans will be looking for me to wear number 8 and in any case I would prefer to have it,” Sanchez said. Out on the course Sanchez looked fast but he was ultimately overtaken by the last rider to start – Tony Martin. Sanchez still finished an impressive 8th 41 seconds down.

It came as no surprise then that Tony Martin won the stage and took the first leaders jersey. HTC-Highroad’s Martin was simply superior, just has he had been in Copenhagen two weeks ago. He won by an impressive 17” over David Millar. 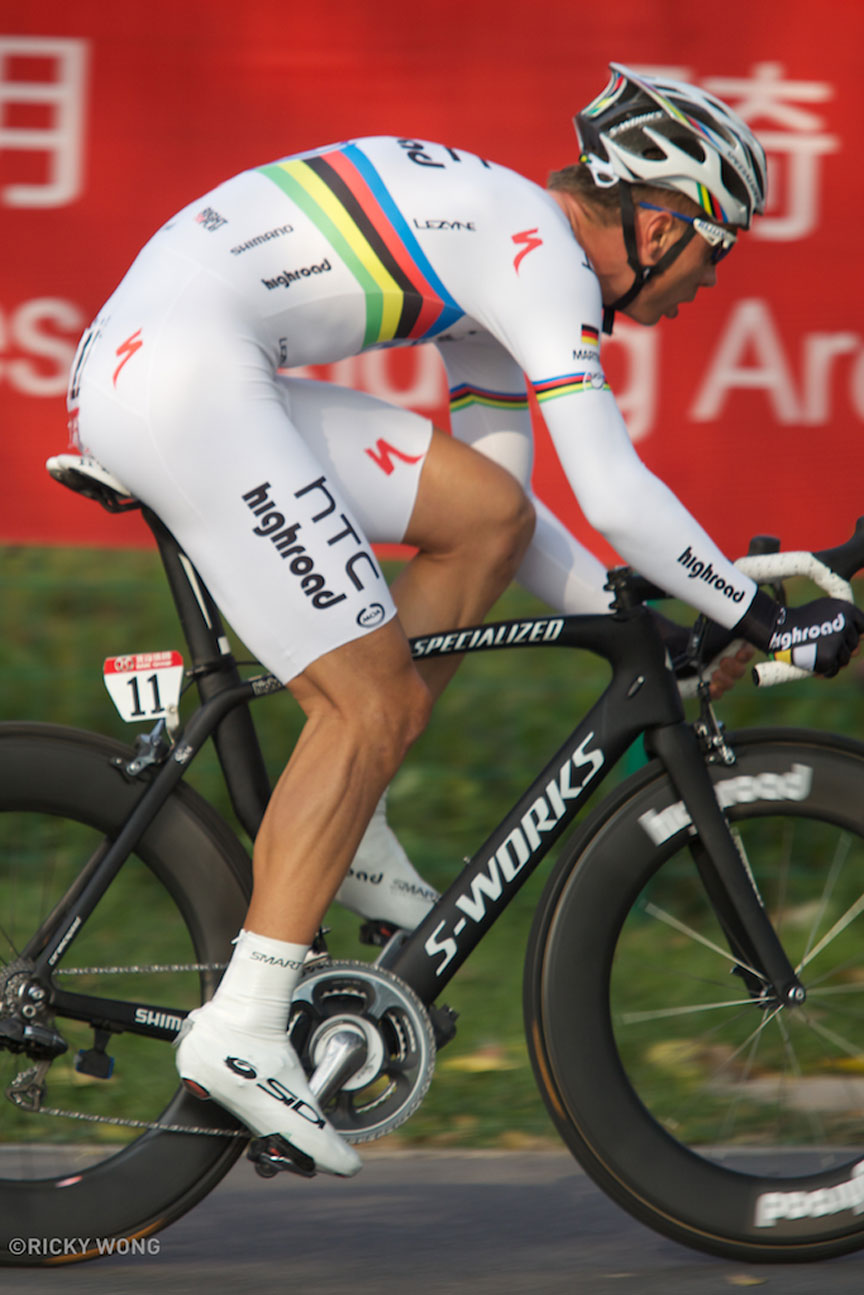 “It is my first time ever in China and it is a big honor to win the first ever stage in the Tour of Beijing,” Martin said.

“I decided a long time before (I won the world championship) to come here. I wanted to be one time in China. For me it is not about the victory, it’s about being here for this nice race.”

With a 17” lead HTC-Highroad will work hard over the coming stages to defend his jersey. With no time bonuses on offer at this race the other teams will have their work cut out for them clawing back this deficit on the Tour of Beijing course.